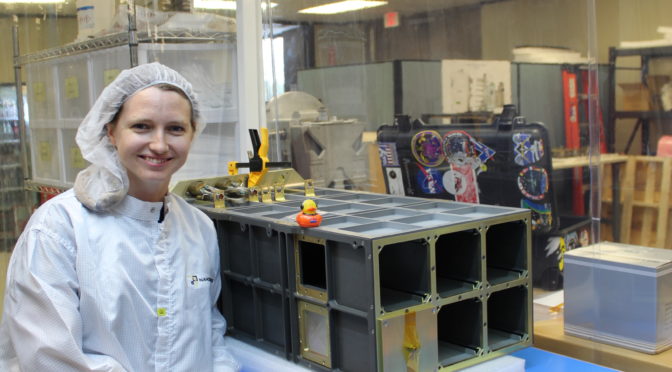 After five years, 25,000 hours, and work by dozens of students (from high school to graduate level), HuskySat-1 is in space. On Saturday, Nov. 2, a Northrop Grumman Cygnus resupply spacecraft launched from NASA’s Wallops Flight Facility in Virginia carrying HuskySat-1 among other science investigations and cargo. In January, the spacecraft will deploy its load of CubeSats, sending HuskySat-1 into orbit.

A CubeSat is a small satellite that measures exactly 10 centimeters (about 3 inches) along each side. HuskySat-1 is a “three-unit” system, meaning it’s the shape of a stack of three CubeSat-sized blocks. And students built all of it.

“Usually people buy most of the satellite and build one part of it. We built all the parts,” said Paige Northway, a doctoral student in Earth and Space Sciences. “It was a pretty serious undertaking.”

The camera setup on board was built with the help of students at the Raisbeck Aviation High School in the Highline School District.

The HuskySat project was funded both through Washington NASA Space Grant and via a NASA Undergraduate Student Instrument Project grant. WSGC Director Robert Winglee was at Wallops for the launch

The launch was broadcast live on NASA TV and is available to rewatch on NASA’s YouTube channel.

Several students from the Husky Satellite Lab were featured in local news coverage.

Just be thankful there are students like Paige Northway and Nathan Wacker, two University of Washington students who think it’s neat to work on stuff like a satellite the size of a shoebox. For most of us, all that is beyond our comprehension. But that’s how things move forward in our high-tech age.

Northrop Grumman launched a robotic Cygnus cargo capsule to the International Space Station today, marking one giant leap for a small satellite built by students at the University of Washington and Seattle’s Raisbeck Aviation High School.

Students are often told words of encouragement, such as “the sky is the limit.” These University of Washington students opted to shoot for the stars instead.